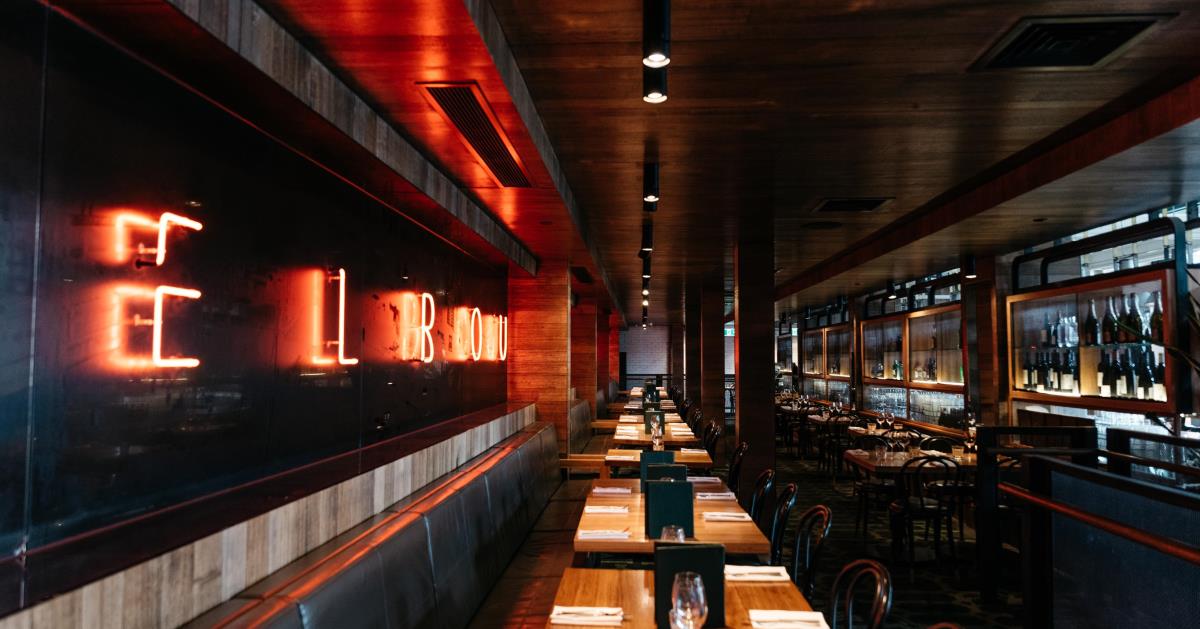 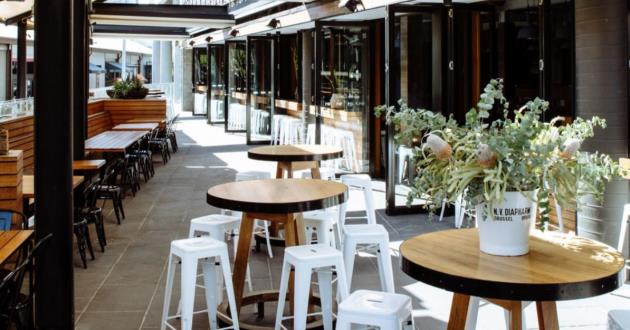 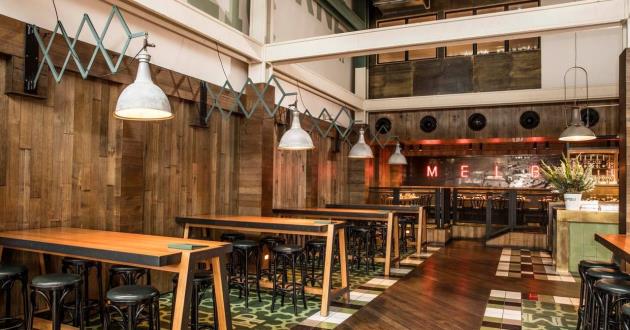 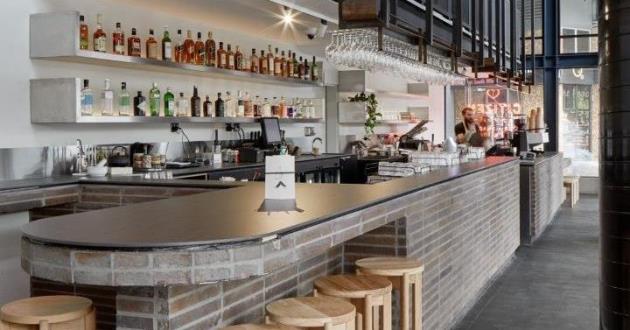 Melbourne Public is one of the most impressive spots in one of Melbourne’s newest drinking and dining destinations (alliteration!). Seriously though, South Wharf is finally cropping up on the collective radars of those in and around Melbourne, and that’s probably in large part because of the high quality bars, restaurants and cafes littered along that stretch of Yarra. Including Melbourne Public. It’s a cafe, dining room and bar, housed within one of those very impressive reappropriated wharf sheds. By that we mean it’s all exposed beams, and views of the Yarra, combined with modern day boutique beers, wines and a kick-ass dining menu. In the main bar that aforementioned industrial flair is on show, with “heritage reconditioned industrial lights” hanging the beams and high ceilings. What does “heritage reconditioned industrial lights” mean? That’s probably just a long-winded way of saying “this room looks very nice”. The open plan area lends itself - apart from after work drinks and watching the game - to corporate and cocktail functions, as well as big birthday celebrations. The dining room is also available for functions. Melbourne Public is found on Dukes Walk, South Wharf. For those not in the know (it’s okay), walk along the Yarra past the Melbourne Convention Centre then voila! bars and cafes aplenty. Given its proximity to Spencer Street, both Southern Cross Station and 96, 109, and 112 trams are within strolling distance. 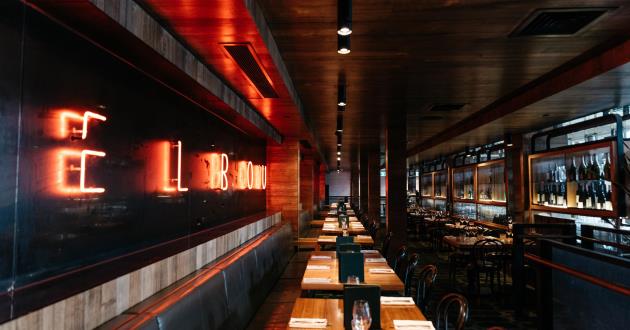 Our dining room is situated behind the main bar, and elevated - that basically equates to an exclusive, somewhat resplendent ambiance of "we're up here and having a night of VIP dining". Red neon light on the wall, a modern design with spla... 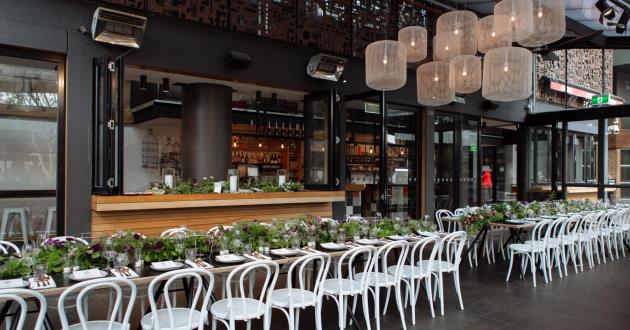 The terrace deck is a north-facing ground floor area with a retractable roof and private bar. That means sunshine during summer, and protection during Melbourne weather's more schizophrenic moments. It also means a private space great for c... 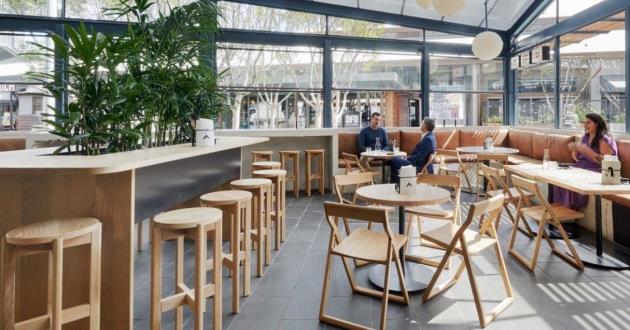 A Japanese influenced bar focused on good beer, good food and good times. With a menu that’s fun to share including over 25 gins and whiskeys, and a unique cocktail list. We have created a space to sip, share and snack in South Wharf. Can ... 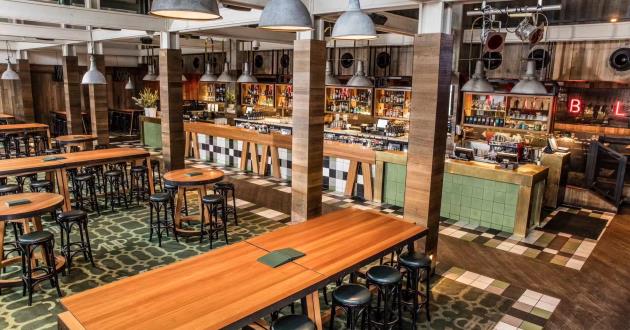 A Large space! A Versatile space! A Space with industrial flair! These things are all ways one could describe our bar area. What else does one need to know, other than the fact that it's a bar, that's very easy on the eye, and has space e... 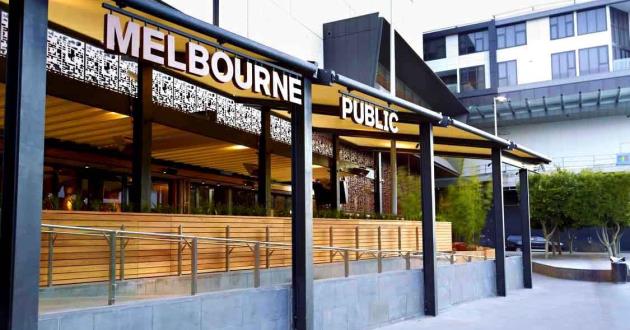 In all of our modern-yet-old-world-industrial, south wharf glory, we're able to comfortably fit up to 1000 people. It's the kind of place that's great for corporate functions, large birthdays, product launches, and weddings. We're well-vers...

How much does an event cost at Melbourne Public?

Events at Melbourne Public start from 0.
This may be subject to change due to seasonality, day of the week, duration and your specific requirements. For an accurate quote for your event please send an enquiry or contact one of VenueNow's Event Booking Experts.

What type of events can be hosted at Melbourne Public?

If your specific event type is not on the list, contact one of VenueNow's Event Booking Experts and they will check if Melbourne Public is able to facilitate your event or will help you find an alternate venue.

How do I find out if Melbourne Public is available for my event date?

The best way to find out if Melbourne Public is available for your event date is to send an enquiry through or get in contact with one of VenueNow's Event Booking Experts.

What catering / food and beverage options are available at Melbourne Public?

What steps are involved in booking an event at Melbourne Public?

There are a few steps involved in booking an event at Melbourne Public and the VenueNow team are here to do the heavy lifting for you.

Once we've gathered these details, the VenueNow team will contact the team at Melbourne Public to check:
1) Can they host the event on your preferred date / time? If not, what are some alternate dates / times?
2) What is the estimated cost based on your event requirements?

If you're happy with the proposed price and dates / times, the VenueNow team will connect you with Melbourne Public to finalise your booking (which may include a site visit if you choose to do so).

VenueNow provides this service free of charge to you as we are paid a small fee by Melbourne Public if you book via us.