Mansion Hotel & Spa at Werribee Park is a truly transformative experience. Surrounded by the beauty of Werribee Park, you’re immediately greeted with a feeling of serenity and clarity. Two feelings which, when paired with a conference or meeting, can unlock the greatest potential.

Not ones to do things in half measures, Venuemob hosted its most immersive and luxurious #VenuemobVIP event yet – treating an intimate group of esteemed clients to an overnight familiarisation experience at Mansion Hotel & Spa at Werribee Park.

Suitcases in tow, 17 VIP guests gathered around the brilliant technicolour LEGO bar at BangPop in South Wharf. Bubbles in one hand, Thai fish cakes in the other – an excitable hum filled the stylish space. Unfamiliar with the Mansion Hotel & Spa and Werribee Mansion, there were wide-eyed smiles of, “I wonder what it will be like?!”

Seemingly minutes later, we filed into the impressive forecourt of Mansion Hotel & Spa. 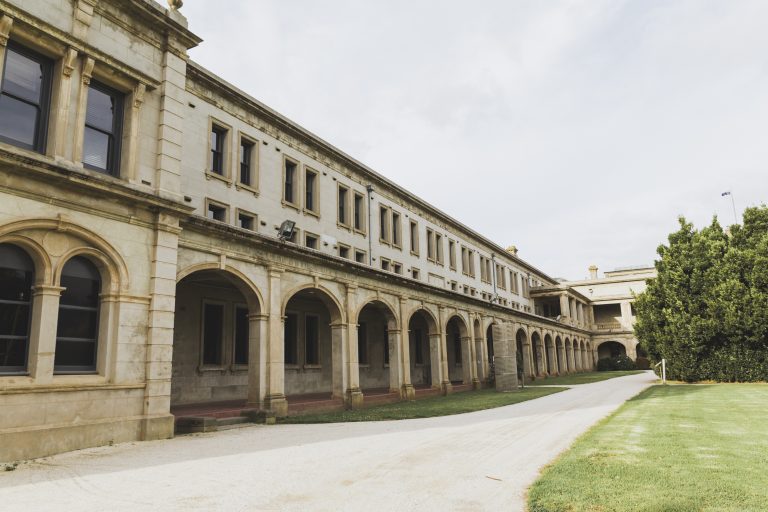 The hotel is a fluid crossover of the historical and the modern. Renovated in the early 2000s, the building itself was originally a seminary. The grand lobby, with its stylish decor, still lets its period details shine through.

From the moment we entered the property, nothing was left to chance. Check-in was seamless and in a moment, we were sipping our welcome watermelon mojitos, and settled into our rooms.

The harmonious integration of old-meets-new is on full display in the 51 Heritage Rooms in the hotel. With the walls protected by heritage restrictions, the bathrooms had to be incorporated into the existing room itself. Raised, as if on a platform, was the sparkling bathroom, complete with all the 5-star modern luxuries. A sliding frosted glass door maintains privacy, without creating that feeling of dissection.

Gathering in the downstairs lobby, we were soon guided around the impressive property and its various versatile spaces scattered throughout. Each space has its own personality to complement a range of events.

The Ballroom is an airy, light-filled space. Part of the original seminary, the windows overlook the historic Werribee Mansion facade and rose garden. The windows in the ballroom were purposely set at standing view-only height, so not to distract the students from their theological studies (read: maximum concentration, ideal for conferencing). You can understand why – the Ballroom is surrounded by natural and structural beauty. 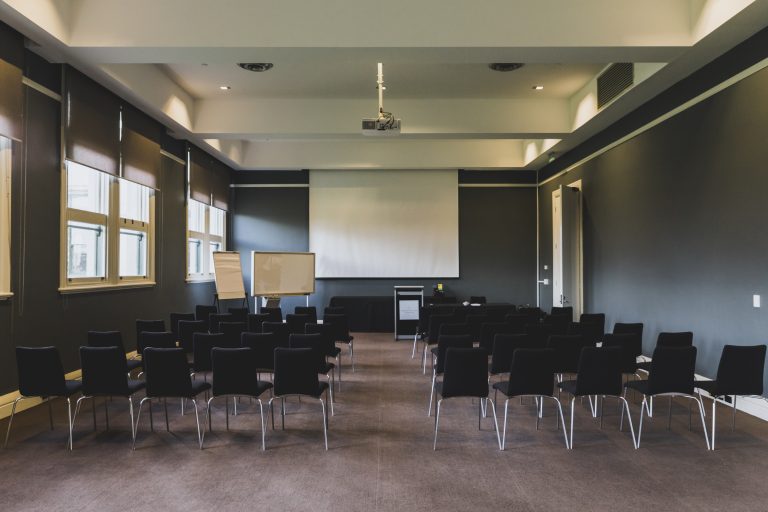 As we continued along, each space revealed its own unique features and outlook. The semi-permanent marquee in the grounds is a romantic delight, complete with festoon lighting, private courtyard and drapery.

The barn is a beautifully rustic alfresco space – overlooking the stables and impressive kitchen garden. 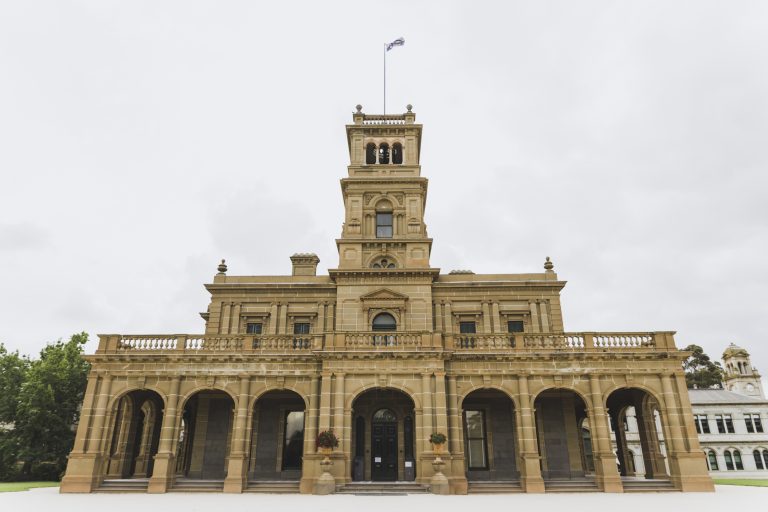 Even the historic Werribee mansion itself has hosted intimate dinners in its recent history. It perhaps is not the best space for fans of red wine varietals – due to heritage restrictions and some very sensitive tiles, any coloured beverages cannot be served within the mansion museum. But don’t fret – Mansion Hotel & Spa can serve beverages all the colours of the rainbow. 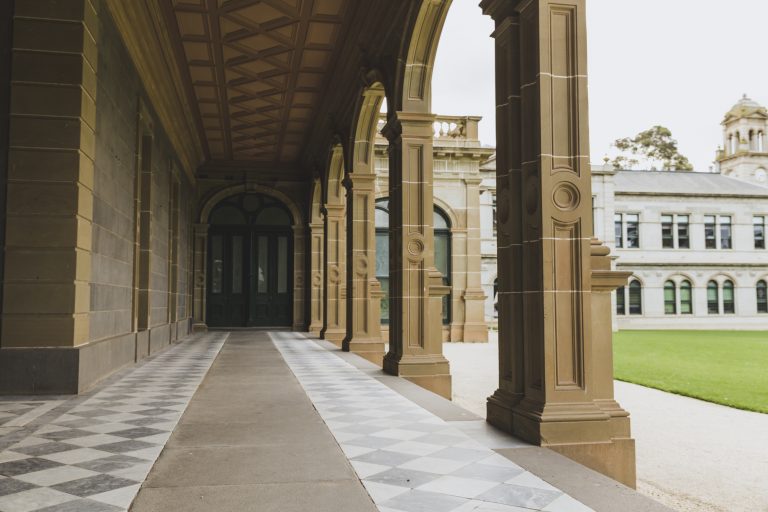 The highlight for our group was the Pavilion. Making the most of its surrounds, the full length windows let the light flood in, lush polo field stretching into the distance. Guests tried their hand at making their own Lavender Collins – a floral twist on the classic Tom Collins cocktail. 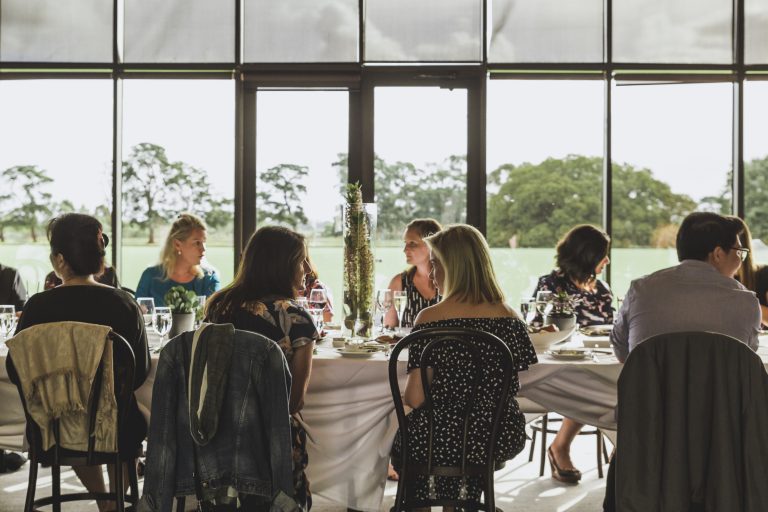 As the evening progressed, the table was soon covered in a range of incredible barbecue-friendly foods, but with a twist. Fried chicken was tucked into pillowy bao buns, sriracha mayo and cucumber forming a blanket. Slow-roasted lamb was finished on the barbecue, the succulent meat melting away from the satisfyingly crispy, charred edges. 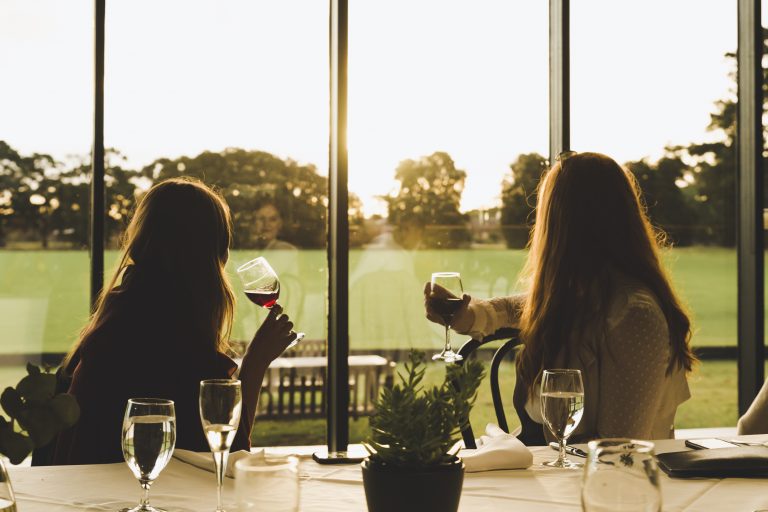 As the sun set and a warm glow settled on the Pavilion, glasses clinked and a gentle hum filled the room. It was time for the final stage of the evening – a nightcap or two in the snooker room. The intimate and relaxed space gave people time to kick back and reflect on the eventful afternoon and speculate on the day ahead. 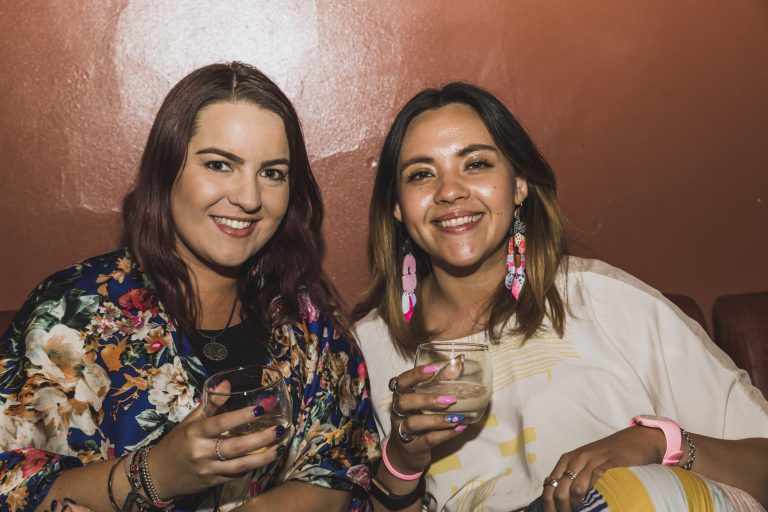 After an excellent night’s sleep in plush comfort, guests tucked into breakfast as VIP guest Michelle Redfern, founder of Advancing Women, led an inspiring talk on how to be your own CEO. The room, mostly made up of women (as is often the case in the events industry), listened, eyes fixed to Michelle’s powerful message. You are your own brand manager, your own boss of your future. The room was positively charged by the end of her talk, inspired to bring their best self to their workplace come Thursday morning.

The buzzing group was then taken to Werribee Open Range Zoo. Greeted by a gorilla, the group’s spirits couldn’t be dampened by chilly drizzle. As the safari bus made its way around the grounds, each turn revealed another incredible animal. Vera the camel tried to give guests a little kiss. Amani the giraffe strutted along with his catwalk-prowess. Johari the lion looked upon our group with cat-like disdain. And my namesake, Pip the zebra, absolutely nailed the mannequin challenge.

The tour of Werribee Open Range Zoo delighted the entire group. It was a fantastic activity, showing us the wonders of the animal kingdom, while learning a few facts along the way.

Naturally, the perfect activity to follow was...a wine tasting at the stunning Shadowfax Winery. “A trip to the zoo and a wine tasting – not a bad Wednesday,” remarked one cheerful guest. 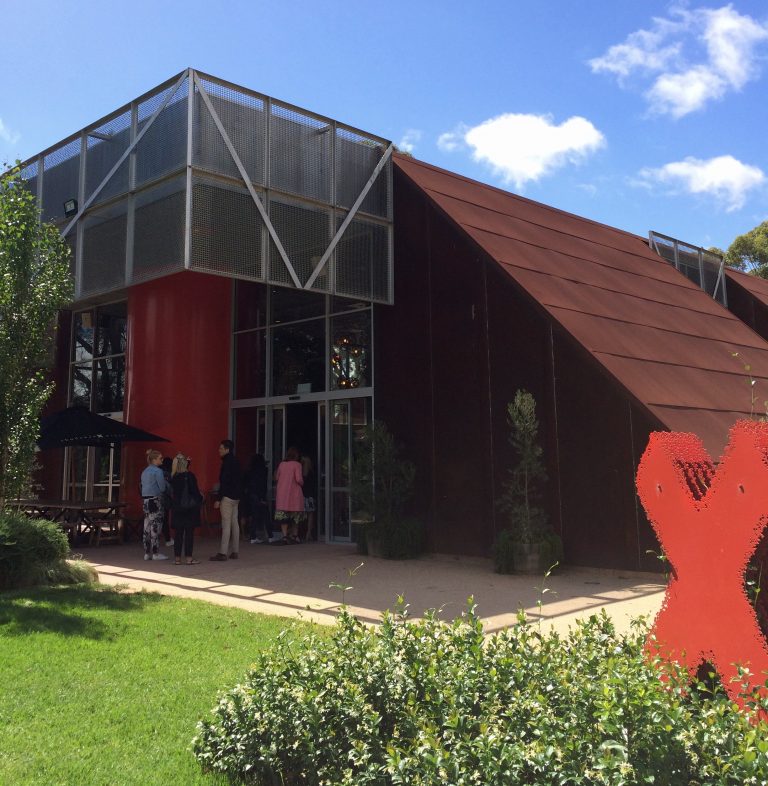 Shadowfax Winery, within walking distance of the hotel, is a striking building. The modern interior would be an ideal location for an off-site lunch, or wine tasting (can definitely vouch for that). The picturesque surrounding grounds of both the winery and Mansion Hotel & Spa lends itself to endless opportunities for corporate team building activities.

Buzzing, and slightly buzzed, the team made their way to Joseph’s Restaurant, at the bottom of hotel. As the two days of excitement and new experiences drew to a close, guests were treated to one final glass of wine, and another incredible meal. Smoky jerusalem artichoke and crispy calamari starters, tender hapuka with spring peas, or satisfyingly comforting scotch fillet with caramelised onion purèe.

Sated, smiling and just a bit sleepy, the 17 Venuemob VIP guests settled into their seats on the bus, letting the events of the past two days catch up with them.

It was a familiarisation event unlike any other – a truly immersive, luxurious experience. From sitting in a sun-drenched pavilion, to being greeted by a herd of zebras – the team at Mansion Hotel & Spa and its neighbours demonstrated how conferencing can be so much more than fluorescent lighting and white walls.

Inspired? Get in contact with the Mansion Hotel & Spa team to start planning your dream event >> 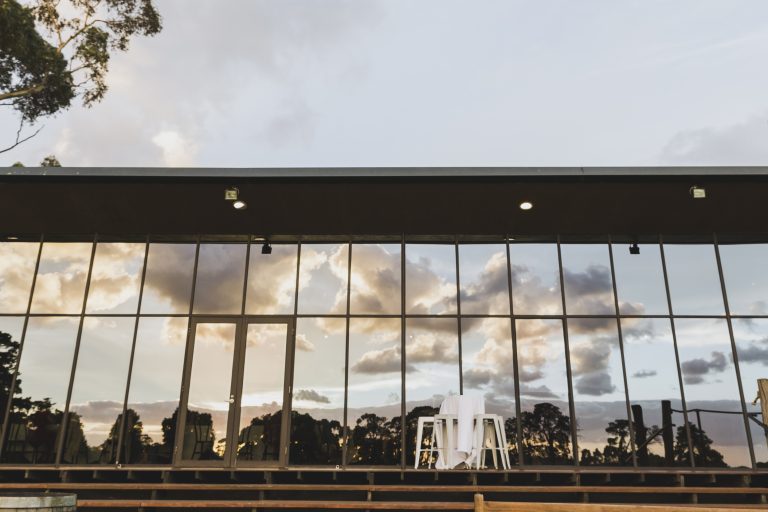 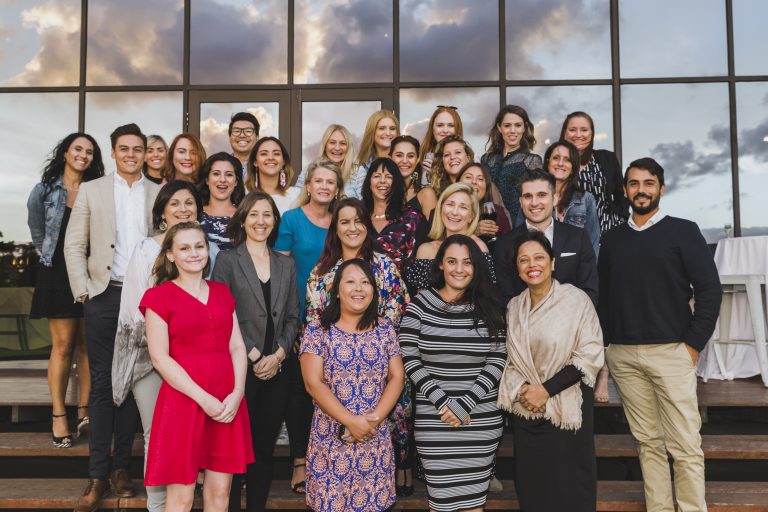 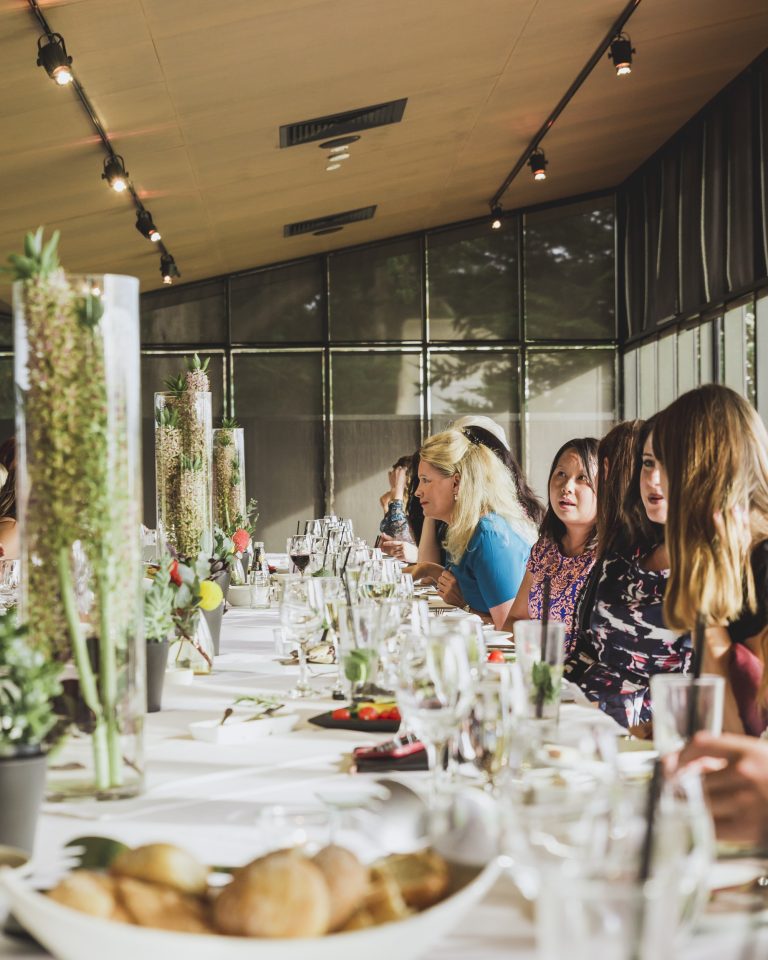